Upon arrival at the Colombo International Airport, customs procedures, luggage collection and meeting with the Spanish speaking guide will welcome us and accompany us on the transfer to the chosen hotel. After a short break, we will begin visits to the city.

Breakfast. In the morning, transfer by road to the north, to the zone of the cultural triangle. The journey will take between 6-7 hours. (Possibility of making this trip by seaplane (see applicable supplement), with a duration of about 30 min). Upon arrival, we will visit the Dambulla caves, some from the 1st century BC, with numerous Buddha statues. Accommodation in the chosen hotel.

Breakfast. We will begin the visits in the zone, in the rock of Sigiriya, old Palace of the king Kasyapa, that excels in the middle of a leafy vegetation. We will reach the base of the rock by car. The most daring will be able to climb the almost two thousand steps that lead to its summit. The site is a World Heritage Site since 1982. Later, we will visit the remains of the ancient capital, Polonnaruwa: Lankatilake, Tivanka, Thuparama and Gal Vihare, among many others. The latter has four Buddha images, carved in stone, two in meditation, one standing and another sitting. Polonnaruwa gathers, undoubtedly, the best artistic complex of the whole island. At the end, return to the Hotel to rest.

Breakfast. This day, we will visit the remains of Anuradhapura, the capital of Sri Lanka from S.V. A.C. until S.X D.C.
The greatest treasures of the city are its stupas built of bricks and

hemispherical shape. The most notable of these stupas are the Ruvanveliseya dating from the second century BC and is about 100 meters in diameter, the Jetawanarama of about 110 meters and the Stupa Thuparama. The most famous relic of the city is the sacred Bo tree, which is said to have formed from a branch of the tree under which Buddha attained enlightenment. It was planted 2250 years ago and is the oldest tree in recorded history in the world. Next we will visit Mihintale, place where Buddhism was introduced in Sri Lanka in the year 247.

AC, since then many of the reigns of Sri Lanka
they have blessed this place with magnificent and amazing Buddhist sculptures and architectural constructions such as a hospital, a monastery, stupas, some of which are in perfect condition and others are deteriorated over the years. Later, return to the Hotel to rest.

Breakfast. At the agreed time, we will start a new route by road, through the interior of the island, this time, to Kandy. En route, we will visit Matale’s spice garden. Arrival in Kandy and private transfer to the chosen hotel. Lodging procedures. At the agreed time, we will make the most important visits in the city of Kandy. We will visit the Botanical Garden and the temple of the Buddha’s tooth, dating from the S-XVII. We will attend a show of kandyan dances. Kandy is the most sacred city of the island and is located in a beautiful mountainous landscape. Its craft shops, works in wood, silks and large jewels are famous.

Breakfast. Drive to Nuwara Eliya, less than 90 kilometers, about two and a half hours. En route we will visit a Tea Plantation and learn more about this valuable product of the country and its production process. Sri Lankan tea is one of the most valuable in the world. We will also visit the Ramboda waterfalls. Nuwara Eliya is considered as “the little England” of Sri Lanka. It is in a mountainous enclave where the water acquires a great importance. Highlights beautiful waterfalls that can be seen in their environment. Arrival in Nuwara Eliya and transfer to the chosen hotel. Lodging procedures. Free time to rest…

Breakfast. Early in the morning, we will continue our journey to the south, towards the Yala National Park. The distance that we will travel by car will be about 2 and a half hours. We will do a safari on arrival. If we are lucky we will see leopards, elephants, wild buffalo, deer … The place is truly wild and is bathed by the Indian Ocean, surrounded by jungle, lagoons and rocky areas. After the safari, transfer to the chosen hotel. Free time to rest …

Breakfast. About 158 kilometers, about 4 hours by car, will take us to Galle, which will be our next destination. The largest city in the south of the country, occupied by the Portuguese in the sixteenth century, by the Dutch in the seventeenth century and finally by the British in the nineteenth century. All these people have left their mark on this city. We recommend getting lost on a bicycle or walking around the area of the Dutch fort and going through its streets, its shops … inside the walled area. Stay in the chosen hotel.

Breakfast. Departure by car to Colombo, the capital of the country, located about 120 kilometers, about three hours by car. Upon arrival, private transfer to the airport, for departure by direct flight to Male. Arrival in Maldives, customs procedure and luggage collection. Special transfer by boat or seaplane, on behalf of the hotel, for accommodation at the chosen hotel. Time to rest.

Daily breakfast included during the stay in Maldives. Free time for beach relaxation.

Breakfast. Transfer to Male airport (by boat or seaplane), to depart on a flight back to Spain. 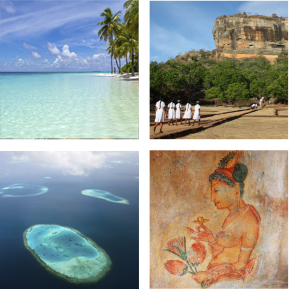 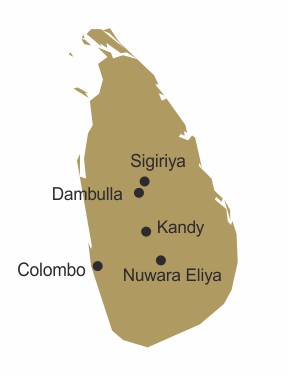