The best of Laos

An itinerary of the essence of the country, starting in the capital Vientiane, the Mekong River valley, including the province of Champasak in the south, Bolovens Plateau, the pre-Angkorian monument Wat Phu, the various ethnic groups that inhabit the country combined with a stay at the charming Luang Prabang, in the heart of the country. One night in Vientiane, two nights in Don Khong island, one night in Pakse and three nights in Luang Prabang.

Arrival in Vientiane, capital of the Democratic Republic of Laos. After meeting our guide, who will accompany us to the Green Park Hotel to complete the formalities of lodging, we will have a panoramic tour of the city. We will visit Wat Sisaket (the oldest of the capital) and Wat Ho Prakeo Temples. We will also visit Patruxai and the Arc de Triumph. At the top the monument, we can enjoy a nice view of the city.

Breakfast at Hotel Green Park. Early in the morning departure in a flight to Pakse, from where we will take the National Southern Road to Champasak to visit the ruins of Wat Phu, prior the Cambodian temples of Angkor and heritage of UNESCO since 2001. We will follow by boat the path by the river to the island Don Khong, one of the largest islands in the Mekong River. Overnight at Hotel Pon Arena. Time to relax and enjoy the
beautiful surroundings.

After breakfast at the Hotel Pon Arena we will explore the villages of Ban Khone, clearly influenced by the French colonial era. We will also continue by boat exploring this area (with more than 4,000 islands) including their Khonephapeng waterfall, known as the Niagara of the east. If we are lucky we may see a dolphin (Pah Kha in local language). Accommodation at the Pon Arena Hotel.

Breakfast at the Hotel Pon Arena. We will leave the island Don Khong towards Boloven Plateau, where one of the best coffees in the world is cultivated. In this area we will visit different villages to know the different ethnic minorities living in the region: Laven, Alak, Katu… After several visits, we will go to Pakse, where we will stay at the Hotel Pakse.

After breakfast at the Hotel Pakse we will have the morning free to wander through the city of Pakse. After that, depart on a flight to Luang Prabang. Upon arrival in Luang Prabang, transfer to the hotel. The tranquility and charm of this city, makes it one of the more pleasant city to visit in all of Southeast Asia. Check-in at the hotel. There will be time to explore the “Night Bazaar”, which every night is celebrated in the city center, full of beautiful handicrafts.

After breakfast at the hotel we will visit the Wat Sene and Wat Xienthong Temples, with roofs that almost reach the ground. We will take a boat upriver Mekong in an atmosphere of total tranquility followed by a visit to the mysterious Pak Ou Caves, with thousands of Buddha statues of various shapes and sizes. We will stop at the village of Ban Xanghai, which makes the rice wine distillation.

Early morning, we will have the opportunity to participate in the ritual of local monks, collecting food donations from residents at first time in the morning, just before dawn, followed by a visit to a monastery and a genuine local market. After returning to the hotel for breakfast transfer to the airport for departure. 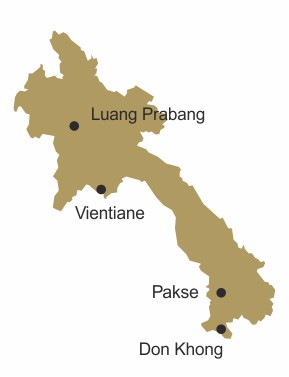 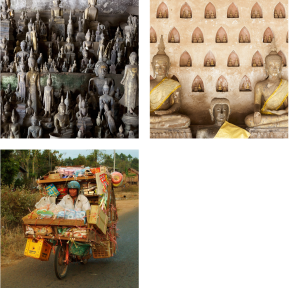