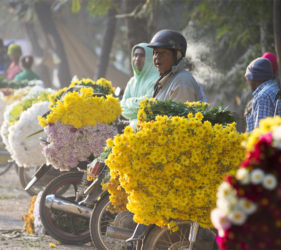 Pwin Oo Lwin, previously May Myo, is an inner Burmese city located about 67 kilometres east of Mandalay. During the British colonial occupation it was boosted in 1896 as a recreational city, because of its fresh mountain climate. The colonial government of Burma was moved to May Myo during the warm season to escape the high temperatures and humidity of Yangon. May Myo means City of May in Burmese. It is called that in honour of the first city administrator, Colonel May, as a legacy of the colonial period. The city has about 10,000 inhabitants originating from India and 5,000 Nepalese who served in the Gurkha regiment of the British army, and who settled in May Myo after the British granted independence to Burma.