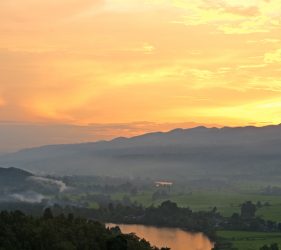 Also known as Thibaw, Hsipaw is a town in Shan State, on the banks of the river Duthawadi. It is located just 200 kilometers northwest of Mandalay. To reach Hsipaw, we recommend taking a local train, to cross the viaduct Goteik. The bridge was built in 1899 and completed in 1900 so the British Empire could expand its influence in the region. The area produces some of the best local fruits, like orange, pineapple, watermelon, dragon fruit… The area has beautiful rice paddies and fruit plantations. Trekking will reveal the Palaung tribes that live in the mountains and are mainly engaged in the cultivation of tea.